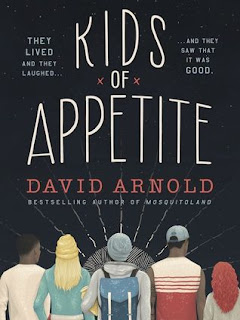 
Victor Benucci and Madeline Falco have a story to tell. It begins with the death of Vic’s father. It ends with the murder of Mad’s uncle. The Hackensack Police Department would very much like to hear it. But in order to tell their story, Vic and Mad must focus on all the chapters in between. This is a story about: A coded mission to scatter ashes across New Jersey.The momentous nature of the Palisades in winter. One dormant submarine. Two songs about flowers. Being cool in the traditional sense. Sunsets & ice cream & orchards & graveyards. Simultaneous extreme opposites. A narrow escape from a war-torn country. A story collector. How to listen to someone who does not talk. Falling in love with a painting. Falling in love with a song. Falling in love.

One of the greatest pleasures of going to ALA Conferences besides seeing friends and connecting over the things we love is the opportunity to meet authors. David Arnold happened to be one of the authors I had the pleasure of meeting and he seemed so down to earth and I had heard great things about his previous book that I was excited to see what this one was about, especially since this would be my first David Arnold book. Was I disappointed? Absolutely not.

There have been much books that I have read where the writing just feels soothing to the soul. Yes I did read this book within a day or so. But by the time I had finished reading it, it felt much longer. David's writes an epic adventure following Vic and a group of friends who in the time period of a week answers life's greatest questions all while completing a list that Vic's father left after he passed.

The cast of characters was so diverse. With their backgrounds, their personal stories and what they were able to bring to the group made the story so much more complete. David did something that 2018 really learned how much I enjoyed when chapters flip between different character's perspectives. I strongly believe that it brings more depth to the story but on the other hand it must be done so constructively so that the story is still able to flow and breathe correctly. David was very much successful to this.

Vic was such a lovable character. Knowing that he has a rare neurological disease called Moebius, a disorder that causes full paralysis to a person's face we see throughout the story the struggles this brings for Vic but also shows how true friendship looks beyond everything and is able to see a person from within. Another character that I seemed to gravitate towards was Baz. Somewhat of the leader of the group I thought his perception of things, his observation of the people and things around him and his captivating stories made his secondary character one that readers would connect to most.

Overall, this is a story that resonated well with me. If books could be related to independent genres of movies this book read like a indie movie. It has the potential to touch hearts. David Arnold writes a book that just feels right, that just feels real. I am happy I had the opportunity to meet him and i most happy that I finally sat down with cup of coffee and a book that made a lasting impression.