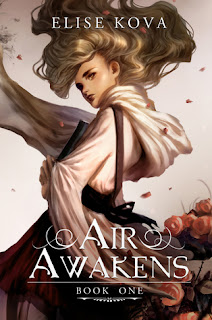 
A library apprentice, a sorcerer prince, and an unbreakable magic bond...The Solaris Empire is one conquest away from uniting the continent, and the rare elemental magic sleeping in seventeen-year-old library apprentice Vhalla Yarl could shift the tides of war. Vhalla has always been taught to fear the Tower of Sorcerers, a mysterious magic society, and has been happy in her quiet world of books. But after she unknowingly saves the life of one of the most powerful sorcerers of them all—the Crown Prince Aldrik—she finds herself enticed into his world. Now she must decide her future: Embrace her sorcery and leave the life she’s known, or eradicate her magic and remain as she’s always been. And with powerful forces lurking in the shadows, Vhalla’s indecision could cost her more than she ever imagined.

This was a series that one of my best friends had recommended to me years ago and it was one that I had special orders from my bookstore but unfortunately after relieving it, I put it to the pile of books I told myself I would read but never get to. However, that changed this summer when I made it a purpose to read books on my shelves. A slow but steady process.

I think it did take me the entire day to read through this but I could have honestly finished this in a few hours. I of course had to eat and take a shower but then it was back to reading. Immersing myself into a story with magic, adventure, a conquest, and a girl with a power that can change the tide of the world forever. It felt like I was reading a Avatar the Last Airbender story but with a kick-ass female heroine as the main character.

Vhalla is a library apprentice that is soon to find herself in a political battle where war might be the only option. Does she know how to fight? No. Does she know how to control her power? No. But that all changes when encountering Prince Aldrick and the shove he gives her. Literally. Now she must learn to conquer her fears and find the control within herself she needs to win this war before all is lost.

This was such a thrilling read. I found it very hard to put it down for even the slightest of breaks. I always found myself wanting to know more. There were moments I wanted to be there for Vhalla to be a friend and guide her. To be there when she felt alone. I felt that even though there were people as her friends, there were always moments she felt secluded because of who she was, well more likely the ability she had.

I do have to say that there were some confusing moments where I did have to go back and re-read scenes because either I didn't fully catch what was going on or I was in disbelief that something like that had to happen. Most of these moments always happened with Prince Aldrick. Do I have a laid out option on him as a character? No. But I feel that there is more to him that we are not getting.

Elise Kova is a brilliant writer. Air Awakens is a brilliant book. Am I glad that I waited so long to read this book after buying it? Yes and No. I came in not knowing what to expect, except the content test messages from my friend telling me how much she loves the book. os for my overall option, this is a story worth reading, a story worth buying, and a story that I will most definitely keep reading.