Review: Neanderthal Opens the Door to the Universe 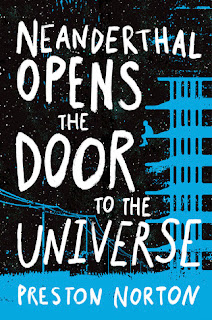 Cliff Hubbard is a huge loser. Literally. His nickname at Happy Valley High School is Neanderthal because he's so enormous-6'6" and 250 pounds to be exact. He has no one at school and life in his trailer park home has gone from bad to worse ever since his older brother's suicide. There's no one Cliff hates more than the nauseatingly cool quarterback, Aaron Zimmerman. Then Aaron returns to school after a near-death experience with a bizarre claim: while he was unconscious he saw God, who gave him a list of things to do to make Happy Valley High suck less. And God said there's only one person who can help: Neanderthal. To his own surprise, Cliff says he's in. As he and Aaron make their way through the List, which involves a vindictive English teacher, a mysterious computer hacker, a decidedly unchristian cult of Jesus Teens, the local drug dealers, and the meanest bully at HVHS--Cliff feels like he's part of something for the first time since losing his brother. But fixing a broken school isn't as simple as it seems, and just when Cliff thinks they've completed the List, he realizes their mission hits closer to home than he ever imagined.

I always thought that the faster you read thru a book equals to the more you loved it, but that is not always the case, especially not with this one. I came into this book expecting one thing but left with so much more.

In the story we follow many realities we see in both young adult fiction and in high schools today. With name-calling to fists fights the troubles of high school are clearly painted throughout the book, but there is something else we do not see very often that gives this story some light. Two unlikely friends and a mission given to them by the God himself.

Cliff Hubbard has not had the easiest of lives. Living with his mom and abusive father, a brother who killed himself, and a name that has become somewhat of a trademark given to him by 80% of the student body, Neanderthal, Cliff is far by having the best year of his high school life. On the other hand, there is Aaron Zimmerman, high school jock, high school hottie, but most importantly high school bully. These two people are the last two people you would ever think of being friends but with an unlikely boating accident, Aaron and Cliff must turn their differences aside in hopes of changing the universe as it is...well at least the high school aspect.

The friendship between Aaron and Cliff is one of unlikely circumstances but I think it goes to show that friendships come in the unlikely of places. How many of you have ever stumbled upon a new friend in a place you wouldn't think of? I know I have. But this friendship is all because of a list. A list with names of people in the school. So, as the story moves along we are shows how different acts can have both a negative and positive affect on people. What we say and the actions we take can change a person's life.

Besides unlikely friendships, there were also those romances that snuck up on you surprisingly. Especially the one between HAL and Shane (Cliff's brother). The only thing I will tell you is that expect tears. Preston does such a brilliant way of revealing this unexpected romance in a way that it had me thinking of the time I first had my own relationship that I wanted to keep a secret.

I cannot express how important this novel is solely for the fact that what takes place in this novel is reflective of some teen high school experiences. Not saying that we should encourage it but know that this is a reality for some teens.

However, I think what really struck a chord with was the struggles that two characters who identify as queer ( I don't want to spoil anything so you will have to read to find out) faced and although not always directly the affects were still negative. I do not think I am the only person who will be able to relate to this unfortunately but the message Preston writes at the end gives us hope.

Preston Norton surprised me with this novel. Was I ready for the emotional rollercoaster ride? No. Did learn something important from reading this? Yes. Is this a novel you should definitely add to your upcoming reads? Yes. Simply, Preston writes a novel with a story that connects with so many readers and gives us a novel that will surely transcend through the years.