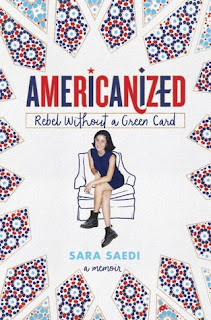 
At thirteen, bright-eyed, straight-A student Sara Saedi uncovered a terrible family secret: she was breaking the law simply by living in the United States. Only two years old when her parents fled Iran, she didn’t learn of her undocumented status until her older sister wanted to apply for an after-school job, but couldn’t because she didn’t have a Social Security number. Fear of deportation kept Sara up at night, but it didn’t keep her from being a teenager. She desperately wanted a green card, along with clear skin, her own car, and a boyfriend. Americanized follows Sara’s progress toward getting her green card, but that’s only a portion of her experiences as an Iranian-“American” teenager. From discovering that her parents secretly divorced to facilitate her mother’s green card application to learning how to tame her unibrow, Sara pivots gracefully from the terrifying prospect that she might be kicked out of the country at any time to the almost-as-terrifying possibility that she might be the only one of her friends without a date to the prom. This moving, often hilarious story is for anyone who has ever shared either fear.

The feeling you have when starting a book and knowing right away that this could be one of the most important books you read for the year, that is this book. I am glad that I was given this opportunity to read this book because of what it taught me as someone that is looking into the window of another's culture.

Author Sara Saedi writes a memoir talking about different life moments in a girls life but really harnessing around her culture and how much not only her culture but the constant fear of possible deportation had on not just her life but her family's as well.

I think that there were definitely moments of laughter and happiness to be had throughout the story but there were moments of sadness but most importantly understanding. I think one of the biggest impacts this book showed me was how important Sara's family was to her. From moments of her parents allowing them freedom to experiment with drugs, as long as they included them, to her calling her mom for advice on recent heartbreak. I think this is an aspect of life that people tend to miss out on and this is what made the story so impactful. That no matter what, they were always going to be there for each other.

Like I said, this was an important book for me to read, especially in the times that we are in now. This book allowed me to see what small things that I have easy to do and have taken for granted in the past, like applying for a job, may not be so easy for someone like Sara and her family. this book offers a snapshot into the Iranian culture, language, and most importantly the families. A memoir that is beautifully written that I am lucky to have had the chance to read.