Review: The Library of Fates by Aditi Khorana 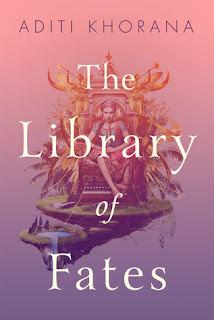 
No one is entirely certain what brings the Emperor Sikander to Shalingar. Until now, the idyllic kingdom has been immune to his many violent conquests. To keep the visit friendly, Princess Amrita has offered herself as his bride, sacrificing everything—family, her childhood love, and her freedom—to save her people. But her offer isn't enough.The unthinkable happens, and Amrita finds herself a fugitive, utterly alone but for an oracle named Thala, who was kept by Sikander as a slave and managed to escape amid the chaos of a palace under siege. With nothing and no one else to turn to, Amrita and Thala are forced to rely on each other. But while Amrita feels responsible for her kingdom and sets out to warn her people, the newly free Thala has no such ties. She encourages Amrita to go on a quest to find the fabled Library of All Things, where it is possible for each of them to reverse their fates. To go back to before Sikander took everything from them. Stripped of all that she loves, caught between her rosy past and an unknown future, will Amrita be able to restore what was lost, or does another life—and another love—await?

I have to admit that I am a person who judges a book by its cover but for this particular book that wasn't the only deciding factor on why I picked it up. The cover was the main factor but I was just intrigued by the synopsis. I am not at all familiar with Indian Folklore but the idea of learning about another culture through reading always fascinates me.

I was somewhat surprised at how fast I read through this book. With fantasy novels, I feel like I have more of a tendency to pace myself for the reason being of how much is going on throughout the novel. The amount of characters, the places they travel, the tidbits of information thrown here and there but this novel everything clicked for me. I do feel that this is going to be a novel that some people may really like or really dislike. For me I liked it.

I do have to say that my favorite character was Thala. I thought her character was so well written that there were some tears shed at the end when she made her decision to go back. Also, there were moments where I did wish she was the main character but then I thought, nah I love where she was in the story. Amrita had her ups and downs for me. I couldn't quite connect with her as much as I would want to for a main character but I was overall pleased. Arjun, I was glad he got dropped from the story. Yes I understand you have to keep your family safe but come on dude.

The story pulled me from the very beginning with the parable and I liked how all these stories soon became a reality for the characters and everything fell together in place. I do wish I could have had more of the "Library of All Things" but I wonder if the novel would have dragged on then. I am surprise, though, that this is a stand alone novel even though it did on a good note. Curious to see if there could be a possible novella.

Overall I was throughly pleased with this novel as a whole. I am interested in checking out Khorana's debut novel. If you are looking for a different type of fantasy with a fast paced plot, emotionally driven characters and a tear jerking ending then check this out.