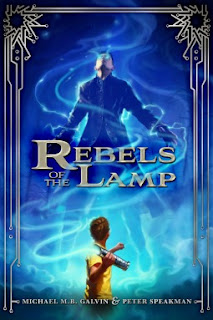 Life is a blast when you have your very own genie. But when Parker Quarry is shipped from sunny Los Angeles to live with relatives in a quiet New Hampshire college town and releases a 2,000 year-old jinn from an ancient canister "borrowed" from the university building where his uncle works, the biggest blasts comes from the millennia old power struggle he reignites.Now it is up to Parker, his mild-mannered cousin, Theo, and their wiz-kid classmate, Reese, to stop a battalion of battle-ready jinn from re-starting an all-out war one with humanity in the crosshairs

I am not going to lie when I say that the first thought that came to mind when seeing this book was Disney's Aladdin. But that wasn't the case with this book. With just the first chapter I was transported to a car chase with three kids and a genie. Although there is much more than just that and I was ready for the adventure...at least I thought I was.

Who wouldn't want to have a genie. I know I would as well as Parker. Reese and Theo are a little on edge at first and just as they are about to side with Parker...things hit the fan. With everything that happens, I do not know if having a genie is really worth the effort. Even if the entire world could be on the line.

Parker is a rebel, an adventurer, some might even say he is a troublemaker. Although, he makes rash decisions he was this character that was genuine and threw himself in danger to protect his friends and family. He sort of reminded me of this person with these crazy ideas and Theo and Reese being his reality check. Now does anyone have a friend/s like that. Cause I know I do.

What I liked was learning the backstory of Fon-Rham. We learned how sometimes we lose ourselves to power and need to get lost to really find ourselves. Fon-Rham and Parker's relationship made the story for me. There was this constant sarcasm that can make this book appealing to the younger readers.

The story moved with ease, I was on my toes constantly, and the story hooked me till the very end. Galvin and Speakman write a fantastical middle grade novel that leaves me wanting more. Filled with fighting genies, high speed chases, world traveling, this  book will leave you wishing for your own magic lamp.