Review: Most Dangerous: Daniel Ellsberg and the Secret History of the Vietnam War 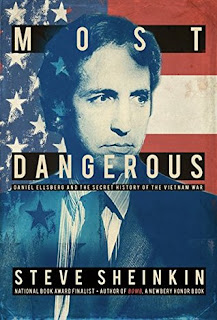 From Steve Sheinkin, the award-winning author of The Port Chicago 50 and Newbery Honor Book Bomb comes a tense, narrative nonfiction account of what the Times deemed "the greatest story of the century": how whistleblower Daniel Ellsberg transformed from obscure government analyst into "the most dangerous man in America," and risked everything to expose a government conspiracy. On June 13, 1971, the front page of the New York Times announced the existence of a 7,000-page collection of documents containing a secret history of the Vietnam War. Known as The Pentagon Papers, these files had been commissioned by Secretary of Defense Robert McNamara. Chronicling every action the government had taken in the Vietnam War, including an attempt by Nixon to foil peace talks, these papers revealed a pattern of deception spanning over twenty years and four presidencies, and forever changed the relationship between American citizens and the politicians claiming to represent their interests. The investigation--and attempted government coverups--that followed will sound familiar to those who followed the scandal surrounding Edward Snowden.

I am not a person that will go around stating that nonfiction writing nor anything pertaining to history is my favorite. However, I do believe that a book could change that and for me this was this book. Being pulled into a story that tells a troubling time for America was not a story I thought would want me to know more but it did.

The book follows Daniel Ellsberg as he makes a decision that changes American's people's view on leaders by publicizing documents known as the Pentagon papers. With these papers we are able to learn what risks different presidents would take to make sure that they did not lose this war. Even if meant sending Americans off to their death.

I do not know how many times my jaw dropped while reading this book. I remember learning about the Vietnam war and most importantly what American soldiers faced when returning after the war. But this deception that was going on and what was being told and what was being hidden makes you wonder if our leaders really have our best interest at heart. I know this is bold statement but where is the line of holding back information to protect a person's view of something so terrible.

I think what really kept me reading was the idea that this was told in narrative. I am a person for stories and Sheinkin did a brilliant job of telling this one. I am intrigued to read more by him and see what else I can learn.

This is the perfect book to teach for students. Sheinkin writes to educate but does it in a way that anyone can understand. I do think that students will need to have some prior instruction on the Vietnam War before diving in. Sheinkin is an author to keep on your radar for nonfiction writers and I know I will be reading more by him.