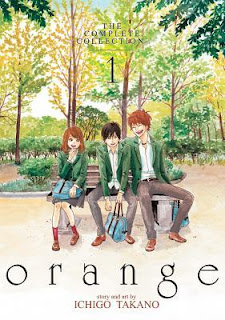 On the day that Naho begins 11th grade, she receives a letter from herself ten years in the future. At first, she writes it off as a prank, but as the letter’s predictions come true one by one, Naho realizes that the letter might be the real deal. Her future self tells Naho that a new transfer student, a boy named Kakeru, will soon join her class. The letter begs Naho to watch over him, saying that only Naho can save Kakeru from a terrible future. Who is this mystery boy, and can Naho save him from his destiny? This is the heart-wrenching sci-fi romance that has over million copies in print in Japan!

If you were to receive a letter from yourself from the future telling you that you could save someone, would you listen to it? Would it matter if you knew them or not? I am not a big fan of manga but every now and then there is one that just jumps out at me and using my gut I go with it. I decided to go with it in Orange and it was the best decision I could have made.

In the first collection we follow Naho and her friends as they make it a part to include new student, Kakeru, in their plans. With only the guidance of a letter, Naho has to second guess a lot of judgement calls and wonder if what she does is enough to save Kakeru. However, how far will she need to go to finally save him or will the letters make her take a wrong turn.

Naho, is such a sweet character. She is this bright, young, caring person that always looks for the best in people. She is like the mother hen of the group. She never hesitated in listening to the letter and setting out to save Kakeru. Her feelings start to grow stronger every day she spends with him but does she take the chance of telling him how she feels?

Kakeru is a character you just want to hug. He has so many things going on in his life that I would think a distraction is what is most needed. Luckily for him, Naho and her friends become that distraction he needs and soon he finds a family in this group of friends.

The story moved for me but there were moments where I stopped and thought about what just happened or what I thought might happen. This is a good thing though. In this first collection we find more than just people trying to save someone. We find a group of friends that make it and show the importance of friendship. We have a group of friends that will go to the ends of the earth for each other. We have friends that although feelings might clash they will always be tbere to lend a shoulder.

I am excited to see where this goes and to see the future of the Kakeru. Do you think he will make it? I am working on ordering the second collection and immersing myself once more in this brilliant, constructed manga. Maybe this is my first step in reading more manga.