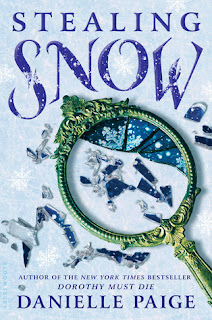 
Seventeen-year-old Snow has spent the majority of her life within the walls of the Whittaker Institute, a high security mental hospital in upstate New York. Deep down, she knows she's not crazy and doesn't belong there. When she meets a mysterious, handsome new orderly and dreams about a strange twisted tree she realizes she must escape and figure out who she really is.Using her trusting friend Bale as a distraction, Snow breaks free and races into the nearby woods. Suddenly, everything isn't what it seems, the line between reality and fantasy begins to blur, and she finds herself in icy Algid--her true home--with witches, thieves, and a strangely alluring boy named Kai, none of whom she's sure she can trust. As secret after secret is revealed, Snow discovers that she is on the run from a royal lineage she's destined to inherit, a father more powerful and ruthless than she could have imagined, and choices of the heart that could change the fate of everything...including Snow's return to the world she once knew.

This was one of those reads that you have slowly been hearing about the anticipation and when given the chance to snatch a copy at ALA in Orlando I had to take that chance. I have heard not but amazing news from Paige's Dorthy Must Die series and even though I have them and not read them (I know please do not judge me) this is my first Paige book so I was walking in without expectations and I left wanting more!

I have no idea why but lately I have been drawn to characters who start off in a mental hospital and I do not know why. Other than that random comment, Snow's life is about to change when her dreams become more frequent, a new orderly comes into the hospital, and the urge to escape become more and more evident to finding out who she really is. Escaping Whittaker now goes on an adventure into a world to find out who she really is and if she has the power to inherit the throne that is out to get her.

The book did have a little bit of a slow start for me but I have two possible ideas as to why:

1. I am reading, like I mentioned, another book starting in a mental hospital.

2. It is the start of the new series and there is a buildup.

Those are my two reasons and I am sticking to them. However, as I got further into the book the story picked up and it slowly became harder and harder to put down the book. The adventure, the action, the hint of romance and by the end I needed the next book and somewhat hated that I had the ARC because I have to wait longer. #sadness

Snow has been through a lot and when finding out that her life is much more that the one she has been living, it gets crazy. She has these responsibilities, she has this power that grows every day, and of course she has to fight her father who wants to kill her. What person wouldn't want her life. Just kidding.

Do not ask me who I want her to be with. I do not know. I am so confused. I usually have a clear idea of who I want to ship but I can't. Sorry for the short sentences. The idea that I do not know frustrates me. Let me know who you choose.

Overall, Danielle Paige captured my attention and has me waiting anxiously for the next installment as well as making her first series move up on my TBR. Add this book to your reading list and let Snow steal your heart.