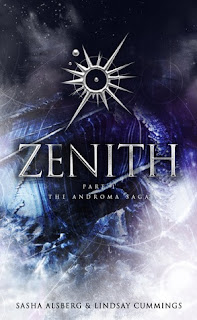 
Most know her as the Bloody Baroness, the captain of a fearsome glass starship called The Marauder. Androma and her crew strike terror in the hearts of those who cross them amongst the many corners of the Mirabel Galaxy.When a routine mission goes rogue, the all-female crew is captured by a bounty hunter from Andi’s past and forced into a job that could, quite literally, start a war that will devour worlds.Meanwhile, on the far side of the galaxy, the ruthless ruler Nor waits in the shadows of the planet Xen Ptera, biding her time. The final pieces are about to fall into place, liberating a plan that will tear Mirabel in two.As the Marauder hurtles toward the unknown, there is one lesson that proves to be true: No one can be trusted in a galaxy that runs on lies and illusion.

I have been following Lindsay Cummings on snapchat and so I have been seeing snippets of this book and was really looking forward to it. I have not read anything from Lindsay herself and Sasha being a debut author I was going in blind. I had few expectations and the only problem with the book was the length and I now have to wait for the next part.

The story follows Androma, otherwise known as the Bloody Baroness and her crew on the Maurader. However, as they are in deep space on a job, it goes wrong throwing them into a deal and having Androma work alongside someone she thought to be dead. As they make plans for their new job, a dark evil is growing and plotting to set the world of Mirabel in two.

Like I mentioned above, the only problem that I had was that it was too short. I understand that the book is going to be written in parts but the reader in me wanted, no needed more. Moving on though. The story so far sounds great and I have not been really into the science fiction genre but this has captured my attention. There were some parts that I wish were a little bit more tightened and not just thrown out there but I am hoping the next book brings more to the story and to the plot.

Androma seems to be a female character who likes to be in control and is willing to do whatever to protect her crew. However, there is a vulnerability within herself that she has managed to push into the shadows but are coming out into the light.

I feel that there is some sort of character romance build up and I will be curious to see where this goes in the upcoming parts. I feel that it can go either way so I will just have to wait and see.

Overall Zenith Part 1 is a great start to an amazing book and hopefully a fantastic series. If you have nothing to read, grab your e-reader and download this book. Short but full of potential, Zenith is out of this world!