Review: Rebel of the Sands by Alwyn Hamilton 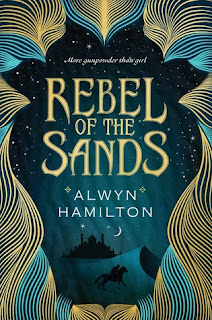 She’s more gunpowder than girl—and the fate of the desert lies in her hands.Destined to wind up "wed or dead," Amani’s counting on her sharpshooting skills to get her out of Dustwalk. When she meets Jin, a mysterious and devastatingly handsome foreigner, in a shooting contest, she figures he’s the perfect escape route. But in all her years spent dreaming of leaving home, she never imagined she'd gallop away on a mythical horse, fleeing the murderous Sultan's army, with a fugitive who's wanted for treason. And she'd never have predicted she'd fall in love with him...or that he'd help her unlock the powerful truth of who she really is.

I know I have been reading a lot of contemporary books as of late but I have decided to go with a little bit of fantasy, and what better than a book people have been non-stop raving about. I picked up Rebel of the Sands at ALA Midwinter and from the moment I got my hands on this book, people have been telling me to read it and I am glad I did, it was enjoyable.

We follow characters Amani and Jin as they embark on a journey in hopes of finding out the secret of Djinni magic and Amani’s secret potential. Amani was just another kick-ass heroine who proved to be stubborn in the fact that once she set her mind on something, it was rare that she ever backed down. Jin on the other hand is mysterious. I knew there was something special about him but I just could not put my finger on it. I will let you figure that one out on your own.

The story flowed well for me but I do have to admit that there were some moments where I did have to go back and re-read some pages because I felt that I was missing something, or the story jump forward in events and I just did not catch the shift. It could be for all I am saying but I want to hear peoples’ thoughts on this.

Overall Rebel of the Sands is a book that should not be passed in the upcoming year. Add this to your shelf, buy from your bookstore, or check it out from your library. I hate that I have to wait a year to continue with Amani and Jin but Alwyn Hamilton has definitely made it on the list of authors to watch out for upcoming book releases.

Check out this amazing trailer!!!!