Review: Jack of Hearts (and Other Parts) by Lev A.C. Rosen 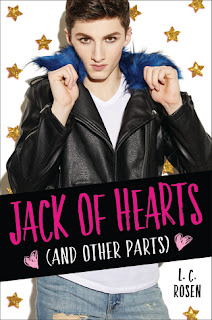 Meet Jack Rothman. He's seventeen and loves partying, makeup and boys - sometimes all at the same time. His sex life makes him the hot topic for the high school gossip machine. But who cares? Like Jack always says, 'it could be worse'. He doesn't actually expect that to come true. But after Jack starts writing an online sex advice column, the mysterious love letters he's been getting take a turn for the creepy. Jack's secret admirer knows everything: where he's hanging out, who he's sleeping with, who his mum is dating. They claim they love Jack, but not his unashamedly queer lifestyle. They need him to curb his sexuality, or they'll force him. As the pressure mounts, Jack must unmask his stalker before their obsession becomes genuinely dangerous...

*Although this novel is intended for young adults, this novel does contain scene graphic sexual situations, language, etc.*

What a way to start 2019 off with. This was the first book of the new year that I was going to read and I do not know if I myself was ready for a book like this. Let me just say for someone who did not read the synopsis of the book, I was definitely surprised (in a good way) of what I was reading and I knew from the first intense scene that there was no way this book would be anything boring.

The book follows Jack Rothman, a high school student who is anything but closed with his sexual interactions. Whether it be with one guy, three guys,  whether they are gay, straight, bisexual whichever, Jack was there to have a good time. Going along with his two best friends Jenna and Ben everything seems to be going right. But when Jenna convinces Jack to start a sex column for her blog and a mysterious stalker appears not only is Jack's life becoming victimized but so does his family and friends.

The novel contains such a nice array of diverse characters that bring something new, something unique to the overall story. However, I want Jack Rothman to be my new best friend. There I said it. Jack is funny, he is honest, he doesn't try to be anyone but himself and that is what spoke to me more.  I needed someone like Jack to have a friend when I was in high school to show me that sometimes you just need to forget what every one else has to say about your life and just be you. But most importantly I needed what Jack did with the column and  Jack of Hearts.

Jack creates this open space where gay stereotypes are discussed, what does it mean being top or bottom, and what it means to talk through sex with your partner/s. He created a space that delved into what to do for youth first time. He talked about being safe. He even talks to the weird fetishization of straight women and their need to know gay culture. The column was a just a smart way to bring up issues that may be hard to have but are necessary.

Rosen goes a step further by adding the insane stalker element and even though I had a list of potential people it still took me for a little bit of a surprise. I knew there were moments that I was reading at night where I had to pause because I started to scare myself into thinking someone was watching me from outside my home.

A.C. Rosen is a an author I hope to read more of in this upcoming year and for someone who is looking for a book that is out of their comfort level but will have you hanging on to the very end. Rosen brought a whole new meaning of being proud to be who you are through Jack of Hearts (and Other Parts).