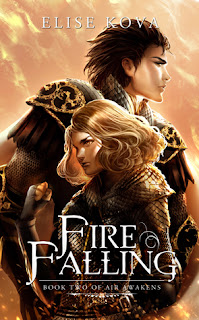 
Vhalla Yarl marches to war as property of the Solaris Empire. The Emperor counts on her to bring victory, the Senate counts on her death, and the only thing Vhalla can count on is the fight of her life. As she grapples with the ghosts of her past, new challenges in the present threaten to shatter the remnants of her fragile sanity. Will she maintain her humanity? Or will she truly become the Empire’s monster?

I do not know what I just read, what I am feeling right now but Elise Kova just stepped up her game. I remember calling my friend immediately afterwards full of all these emotions, most of them disbelief that the author did what she did but mostly in awe of how much I needed the next book.

There is a war on the horizon and Vhalla, now a soldier to the Emperor, must muster up the courage and strength to prepare herself physically, mentally and emotionally. Will she be able to pull herself through or will her past be her downfall.

I think what I liked more about this second installment was this uncertainty that followed with every page turn. Elise Kova, like I said, did not hold back. There was this rush of adventure, the thrill of combat, and the  exhilaration of magic flowing through me as I read on. A much faster paced read that resulted in  sense of sadness when it ended.

In Air Awakens I know there was some moments where my emotions did start to get the best of me but I can honestly say that there were tears shed and most knowingly in one particular scene. I knew it would eventually happen or I felt that it would happen but I was not ready for it to happen so soon.

Have I made a decision on where my heart lies with the romance in this book? No. Am I happy with the decision she has made? I am content. Do I see this having many more ups and downs? Yes.

At the end, Elise Kova has brought a whole new Vhalla to the story as well as a story that has me only wanting more. I am excited to continue this adventure and I highly encourage you to  check out this fast pace story that will only give you more and more reason to continue reading on.