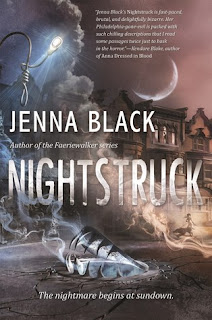 
It starts with a cry in the night. Becket, walking her dog one winter evening, fears it’s an abandoned baby left out in the cold. But it is something else—something evil—and it tricks Becket into opening a doorway to another realm, letting a darkness into our world, a corruption that begins transforming Philadelphia into a sinister and menacing version of itself…but only at night. The changes are subtle at first, causing Becket to doubt her senses and her sanity. But soon the nightmarish truth is impossible to deny: By day, the city is just a city, but at night it literally comes alive with malevolent purpose. Brick and steel become bone, streetlights turn into gallows, and hungry alleys wait to snare mortal victims. Terrified citizens huddle indoors after dusk, as others succumb to the siren song of the night, letting their darker sides run wild. Once, Becket’s biggest problems were living up to her police commissioner father’s high expectations and a secret crush on her best friend’s boyfriend. Now she must find a way to survive and protect her loved ones…before the darkness takes her as well.

I think what caught my interest with this book was both the idea of the story and where my imagination was taking me with it. I was excited to see where author Jenna Black took me and the adventure I was ready to embark on especially at night when the reality is not always what it turns out to be.

We follow Becket, your average high schooler. Gets good grades, is involved, has friends, parents are divorced but what isn't part of her daily routine is opening a door of darkness and letting it spread into her world. At least I hope it wasn't?!?!?

For me the beginning was more enjoyable than the end and this is something that rarely happens. Normally it is the ending that saves the book for me. i think what happened was I just fell out of tune with the story. And it could be that my original imagination destination for this book went a different direction and that I could have been so in tune with that idea that anything else was just pushed away.

There were however its moments. Moments where I was on the verge of biting my nails clean off, to moments where my emotions started to get the best of me. I was hoping for more of an understanding as to where this darkness originated from, and quite truthfully a mere idea of how to stop it. But that could be reason why there is a second book.

Becket did seem to grow throughout the story but there was not a full connection with her character either. Is she brave, yes! Is she smart, yes! Did she do some reckless things, who doesn't? I wanted more and it just wasn't there.

For those of you that are wanting to read a book with that paranormal essence than look no further than with Nightstruck! For those who have read it, let me know your thoughts and feelings. A story with a grand idea that in the end fell short for me.