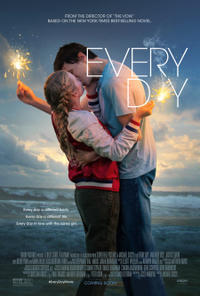 Sixteen-year-old Rhiannon falls in love with A, a mysterious spirit who inhabits a different body every day. Feeling an unmatched connection, Rhiannon and A try to find each other on a daily basis, always unsure of what or who the next day will bring. Soon, the realities of loving someone who is a different person every 24 hours starts to take its toll, leaving Rhiannon and A to face the hardest decision either has ever had to make.

I think from the first moment I had heard that this book was being adapted for film, I screamed. I know that for a fact because I called my friend in Texas and screamed on the phone to her. Am I proud that I screamed, yes. Would I scream again after seeing the film, yes. Did I call my friend and screamed at her to go watch the film, yes.

Let me just preface by saying that this movie is a simple movie. That's all. Simple. But that's okay. At least for me. I know that sometimes it is hard to feel the same way about a movie that you do about a book and that's okay but that wasn't the case with this. Although, I didn't have the same strong emotions I had when reading the novel, I still felt my emotions being tugged different directions. There were parts where I laughed, where I teared up, when I wanted to get mad, and most definitely moments where I just smiled.

I think what the most brilliant part about this movie besides how simply it was put together was the cast of actors and actresses. There was such a diverse cast throughout the movie and one of my favorite characters had to be Vic, played by Ian Alexander, a teenage transgender male. I just think the idea of seeing a transgender person on screen played by an actual transgender teen was pure brilliance. And the fact that Ian was able to sit down and provide input on the script for the character' line to provide an authentic representation was a surreal moment.

Overall, I thought the movie did justice to the book and the ending left the viewer wondering if there  could be a sequel. Who knows, first we just need the sequel which is set to release October of this year. What can you expect from seeing this movie but a movie that is just simply perfect. I am glad I spent my day off with Everyday.

I give this movie five souls!