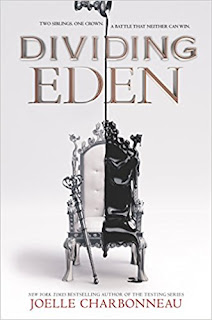 
Twins Carys and Andreus were never destined to rule Eden. With their older brother next in line to inherit the throne, the future of the kingdom was secure. But appearances—and rivals—can be deceiving. When Eden’s king and crown prince are killed by assassins, Eden desperately needs a monarch, but the line of succession is no longer clear. With a ruling council scheming to gain power, Carys and Andreus are faced with only one option—to take part in a Trial of Succession that will determine which one of them is worthy of ruling the kingdom. As sister and brother, Carys and Andreus have always kept each other safe—from their secrets, from the court, and from the monsters lurking in the mountains beyond the kingdom’s wall. But the Trial of Succession will test the bonds of trust and family.With their country and their hearts divided, Carys and Andreus will discover exactly what each will do to win the crown. How long before suspicion takes hold and the thirst for power leads to the ultimate betrayal?

Holy Snap!!!! These were the first words I sent my friend while reading this book. The second thing I sent her was if she was getting a Game of Thrones vibe from the story. Am I selling you yet. Yes? No? Well whatever your answer maybe, you need to go pick this novel up.

I a world where twins, Carys and Andreus, are pitted against each other in a set of trials, the victor winning the crown. Will the two be able to hold onto themselves or will these tests among other dangers prove to be too much and break their bonds of family and friendship?

Carys reminds me of Arya. I do not know if I am the only one that sees this or not but she is a wicked character. In a good way of course. I think I am more excited for her character in the next installment because I feel we just got a small taste of how awesome of a character she is. Her brother, Andreus, well that boy can die. Seriously! I know I am acting out of rage right now and it is with one particular scene and I know that once you read it, you will understand where my frustration is coming from.

The novel was fast-paced and it pulled at the emotions in the right way at the right time. This novel is definitely a YA Game of Thrones. Joelle Charbonneau brings the action to this adventure story. If you are looking for a story that will keep you on your feet and get your heart pulsing, than this is the book for you. Charbonneau writes the perfect novel for both boys and girls and I am excited read the next installment.