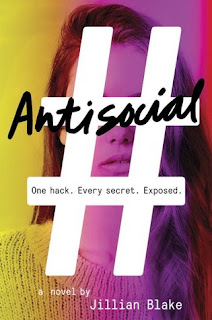 Senior spring at Alexandria Prep was supposed to be for sleeping through class and partying with friends. But for Anna Soler, it’s going to be a lonely road. She’s just been dumped by her gorgeous basketball star boyfriend—with no explanation. Anna’s closest friends, the real ones she abandoned while dating him, are ignoring her. The endearing boy she’s always had a complicated friendship with is almost too sympathetic. But suddenly Anna isn’t the only one whose life has been upended. Someone is determined to knock the kings and queens of the school off their thrones: one by one, their phones get hacked and their personal messages and photos are leaked. At first it’s funny—people love watching the dirty private lives of those they envy become all too public. Then the hacks escalate. Dark secrets are exposed, and lives are shattered. Chaos erupts at school. As Anna tries to save those she cares about most and to protect her own secrets, she begins to understand the reality of our always-connected lives:

I have to admit, seeing all the popular kids secrets get exposed would be kind of hysterical...in a good way. Although, I can't fully remember if I was popular...nah. However, where is the line to saying enough is enough? Is there one? Because sometimes there are secrets that are best kept secret.

Blake writes a mash up of Pretty Little Liars and Mean Girls to bring us a novel where our secrets can be our biggest downfall. Wonderfully written, this novel speaks on the topics that teens today face in their high school lives. However, there was something missing that allowed the book to grasp the seriousness and instead made it a little more comical.

Anna was interesting for me. I wasn't fully sure if I liked her or not but I wanted to. I loved how, even though some secrets were meant to come out, she didn't stop trying to make sure the lives of those around her weren't fully damaged. This showed a different side to her that I think we can all hope for in a girl on the popular side.

Overall, Blake writes a novel that brings a sense of importance to readers in this technology centered world. She incorporates a diverse cast of characters with their own backgrounds and stories but most importantly their own secrets. Is one truly ever antisocial? All it takes is one secret to break free.