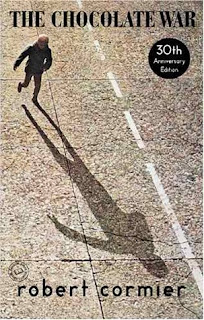 Jerry Renault ponders the question on the poster in his locker: Do I dare disturb the universe? Refusing to sell chocolates in the annual Trinity school fund-raiser may not seem like a radical thing to do. But when Jerry challenges a secret school society called The Vigils, his defiant act turns into an all-out war. Now the only question is: Who will survive?

I do not know if I could fully relate to the chocolate sales, just because I was the kid that always managed to sell more than what was required, yay! However, this story brings so much more than a chocolate sale. It brings memories of that status quo forcing students to be stripped of any individuality and live with a role given to them by the upper class. Although, there always seems to be that one person to breakthrough and cause a rift in things forcing others to act upon in hopes of regaining balance.

Following Jerry Renault, the boy who, after given an assignment by student led group The Vigils, causes a stir in his school’s equilibrium by refusing to sell chocolate. The Chocolate War comes with a cast of characters, a stellar plot, and overall extraordinary story that bring depths and a compelling need to keep reading. Something is brewing and this something is calling for blood.

Cormier was brilliant in in his novel construction when tying themes of fear and psychological warfare around something so simple as a chocolate bar. The role that Archie plays in this novel is so significant and almost mind blowing in how everything he does, every move he makes, and every person he targets with an assignment works towards his favor of putting fear into not just The Vigils and Brother Leon but the entire school.

Cormier’s ending is what resonated the most with me. Seeing how one person can manipulate a whole crowd of people into this onslaught of fear driven bullying that expands into one of bloodshed in nothing short of mind-blowing. I always find it curious to see people’s limits and wonder if there is ever a regret or hope for a better future.

With a book that was required to be read in high school normally never left my shelf. Its pages left in near perfect condition only for dust to collect, The Chocolate War has won its way into my heart. Cormier writes compelling story of a youth’s decision to “disturb the universe” with only a chocolate bar.