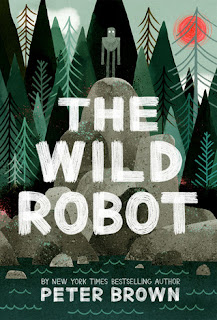 When robot Roz opens her eyes for the first time, she discovers that she is alone on a remote, wild island. Why is she there? Where did she come from? And, most important, how will she survive in her harsh surroundings? Roz's only hope is to learn from the island's hostile animal inhabitants. When she tries to care for an orphaned gosling, the other animals finally decide to help, and the island starts to feel like home. Until one day, the robot's mysterious past comes back to haunt her....

I have heard about this book from countless book talks, flyers, book lists, Instagram pictures and finally after hearing someone talk about it in my class, I knew I had to pick it up. I have not heard much about Peter Brown or his works and any knowledge of the book background was not known when starting. However, when that first page turned into a second it then turned into another chapter and finally I had read the whole book in one setting.

The Wild Robot follows robot Roz as she makes her across her way abandoned on an island looking for shelter but what she find is so much more. A novel on finding a home, building connections, and family differences, Roz looks to become a part of a family until one day her forgotten past comes back.

Roz was such an ingenious character. I do not believe reading much books with robots as a main character (but that could just be me not picking one up). The idea of being in a new place, making new friends, and finding that connection. I think everyone needs a Brightbill. This is the connection that Roz needed to find himself to be fully at home. In the book there is mention of Roz not feeling emotions like animals but I have to argue that thru the book, an emotional connection blossomed between the two characters.

The Wild Robot proved to be much more than I expected. I am happy that I finally took a chance and went with my gut. I am curious to see if there will be a sequel to this marvelous read. Will Roz find out more about his past? What will happen to Brightbill? However, to ask these questions yourself, you must first read.