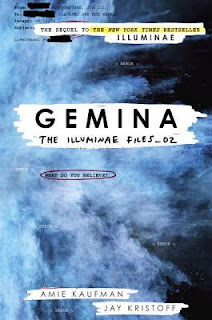 Moving to a space station at the edge of the galaxy was always going to be the death of Hanna’s social life. Nobody said it might actually get her killed.The sci-fi saga that began with the breakout bestseller Illuminae continues on board the Jump Station Heimdall, where two new characters will confront the next wave of the BeiTech assault.Hanna is the station captain’s pampered daughter; Nik the reluctant member of a notorious crime family. But while the pair are struggling with the realities of life aboard the galaxy's most boring space station, little do they know that Kady Grant and the are headed right toward Heimdall, carrying news of the Kerenza invasion.When an elite BeiTech strike team invades the station, Hanna and Nik are thrown together to defend their home. But alien predators are picking off the station residents one by one, and a malfunction in the station's wormhole means the space-time continuum might be ripped in two before dinner. Soon Hanna and Nik aren’t just fighting for their own survival; the fate of everyone on the Hypatia—and possibly the known universe—is in their hands.But relax. They've totally got this. They hope. Once again told through a compelling dossier of emails, IMs, classified files, transcripts, and schematics, Gemina raises the stakes of the Illuminae Files, hurling readers into an enthralling new story that will leave them breathless.

This has to be one of my top anticipating reads of the year. I am so happy that I was able to snag a copy of the ARC at this past ALA Annual Conference. I was taken on an interstellar space opera journey in Illuminae and now I am back for round two. A different story. A different cast of characters. A different opportunity to fall even more in love with this galaxy of a trilogy.

Following the audio files, emails, messaging of Heimdall the reader is instantly transported into a world that pulls you in and hold on till the very end. With new characters Hanna, daughter of the Heimdall captain, and Nik, member of a notorious crime family, their acquantiance as supplier and buyer of a drug called Dust, their lives are going to change. When a crew attacks the station, Hanna and Nik form an unlikely bond to take back the ship and save not just their lives but the universe. No big deal.

Hanna to me is this spoiled girl who I wish would get a dose of reality and long and behold my wish comes true but not in the way I would ever want for someone. Coming from this girl who is used to getting what she wants to crawling through the vents, remembering the battle tactics her father taught her growing up, she suddenly becomes a girl willing to risk her life for others. Nik, on the other hand,   has a dark past that he wishes to keep secret but one event leads to another and now the girl he would make flirting jokes is now the girl he must work alongside to save the station but can she still trust him with his past.

I think I wrote this when I reviewed Illuminae but the one thing I loved the most about this story is the way it is told. It is such an original, different way of bringing a story to life. Kristof and Kaufman set the bar with the first installment and raised it with Gemina.

When hearing that there was someone working on the inside of this heist, I had a really good feeling who it might be but it was interesting to see how Jay and Amie still managed to twist it, pulling my emotions every which way and let me just tell you, tissues were present.

Illuminae is a book that gives you a glimpse of the galaxy in which this story resides and Gemina is a book that brings the explosion. If you have not read the book that started this adventure, drop everything and read it. Gemina is must Fall read.