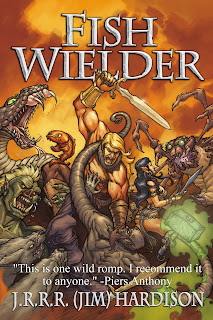 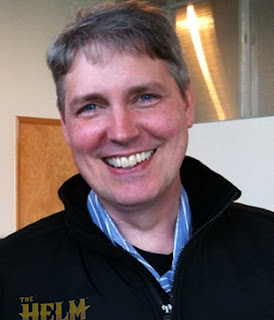 Jim has worked as a writer, screen writer, animator and director in entertainment and commercials since graduating from Columbia College of Chicago in 1988. He is the author of The Helm, which YALSA praised as one of 2010’s best graphic novels for young readers, and has directed animated commercial and entertainment projects, including spots for M&M's, AT&T, and Kellogg's. He co-founded Character LLC in 2000 and has given story advice to many of the world's largest brands, such as Target, Verizon, Samsung, McDonalds and Walmart, and has even appeared on NBC's "The Apprentice" as an expert adviser on brand characters. Jim lives in Portland, Oregon with his wife, two kids and two dogs. Fish Wielder is his first novel.

Fish Wielder is kind of like Lord of the Rings


, set in Narnia, if it was written by the guys who made Monty Python and the Holy Grail while they were listening to the music of They Might Be Giants.In ancient times, the Dark Lord Mauron cooked the most powerful magic chocolate dessert ever made, the Pudding of Power. One thousand and two years later, the evil leader of the Bad Religion, the Heartless One, is trying to recover the lost pudding in order to enslave the peoples of Grome. Only the depressed barbarian warrior Thoral Might Fist and his best friend, Brad the talking Koi fish, have a chance to save the world of Grome from destruction, but that's going to take a ridiculous amount of magic and mayhem. Thus begins the epically silly epic fantasy of epic proportions, Fish Wielder--book one of the Fish Wielder Trilogy.