Review: All American Boys by Jason Reynolds and Brendan Kiely 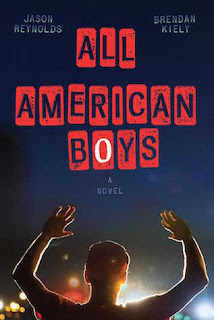 
That’s the sidewalk graffiti that started it all…Well, no, actually, a lady tripping over Rashad at the store, making him drop a bag of chips, was what started it all. Because it didn’t matter what Rashad said next—that it was an accident, that he wasn’t stealing—the cop just kept pounding him. Over and over, pummeling him into the pavement. So then Rashad, an ROTC kid with mad art skills, was absent again…and again…stuck in a hospital room. Why? Because it lookedlike he was stealing. And he was a black kid in baggy clothes. So he must have been stealing.And that’s how it started.And that’s what Quinn, a white kid, saw. He saw his best friend’s older brother beating the daylights out of a classmate. At first Quinn doesn’t tell a soul…He’s not even sure he understands it. And does it matter? The whole thing was caught on camera, anyway. But when the school—and nation—start to divide on what happens, blame spreads like wildfire fed by ugly words like “racism” and “police brutality.” Quinn realizes he’sto understand it, because, bystander or not, he’s a part of history. He just has to figure out what side of history that will be.Rashad and Quinn—one black, one white, both American—face the unspeakable truth that racism and prejudice didn’t die after the civil rights movement. There’s a future at stake, a future where no one else will have to be absent because of police brutality. They just have to risk everything to change the world.Cuz that’s how it can end.

I am not going to lie when I say that this book is not a book I probably would have waited eagerly to read. Not because of issue specifically but because I have been in this reading stride with books of heavy topics. However, after reading the book I feel that I am more willing, let’s go with that, on wanting to read books with heavy topics. Find it strange, I know but I think the idea of reading a book and knowing that there is someone out in the world going through this problem and sometimes books are the only ways to hear someone’s story.

Rashad has grown up being told by his father that he is supposed to not be noticed, always do what he is told, and never argue back. That is until the day he is in a convenient store buying a bag of chips when a officer, after a misunderstanding, forces him outside and beats him and having Rashad be taken to the hospital. Quinn has been living the life. He has great friends, a good family, but that changes when he sees his best friend’s brother unintentionally beat up a kid who he recognizes as someone from his school. Now Quinn has to make the decision of who he will stand by.

I think what this book made me really think about was the idea of how people will overlook something to protect themselves and in the moment sometimes it is only yourself you should be worrying about. I think for Quinn he had to make the decision of going to the authorities and making a statement as a witness and risk breaking family ties and losing friends, but Quinn realized what was at stake.

All American-Boys is a must read for everyone. It presents a heavy topic in a way that teens can relate too. I am really glad I had to read this book for class and I will definitely keep my eyes peeled for more books of this standard.